cSwap DEX has been launched on the Mainnet. With strong frameworks, good mechanisms, and a robust build, a good but healthy incentive system is imperative for the growth of the DEX. Keeping this in mind, we open the discussion to the community on an upcoming proposal to start the next phase of liquidity incentives on cSwap DEX by allocating 214,286 CMDX for 7 days - to be distributed as per the model for Liquidity rewards. These rewards will start when the current reward phase ends.

The weighting of this week’s rewards is based on pool liquidity.

This week four new pools of Evmos and wBNB paired with CMDX and CMST will be added.

The Master pool will receive around 50% of the total incentives allocated for the phase. The other 50% will be distributed equally amongst the Child pools as external incentives. A detailed breakdown of these incentives is in the table at the end of the discussion.

Let’s have a quick look at the rewards mechanism before proceeding further:

There are two types of pools on cSwap DEX: Master Pool and Child Pool. Master Pool would be used on cSwap and other apps as a prerequisite for earning token incentives.

There are multiple combinations for the rewards mechanics. Still, in a nutshell, any liquidity provider will earn maximum rewards only if they provide liquidity in both the master pool and one or more of the child pools. A better understanding of the reward mechanism can be gained from cSwap docs.

The pools incentivized for the next phase will be:

The breakup of rewards for each pool is as follows:

Note: Rewards are in $CMDX 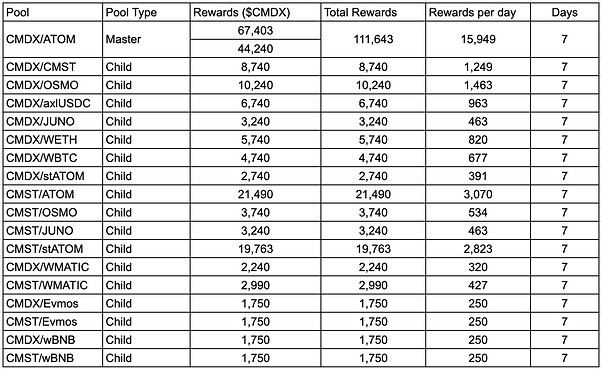 We intend to run the incentives until the protocol matures. Post maturity, these incentives will be optimized again after discussion with the community.

For the next phase I would suggest to keep increasing the rewards to CMST-ATOM and CMST-stATOM in order to keep their APR above the average of other stable-ATOM pairs on other dexes. IMO the target APR should be maintained between 60% and 70% for an healthy and steady grow of the TVL. Those pools are the main driver for the adoption of CMST and as such should be subsidized.

Hi,
I would like to discuss how incentives are built.
I give an example of two pools
CMDX / StATOM Liquidity = $20,000
CMST / StATOM Liquidity = $200,000
My idea is that it is better to balance the liquidity (at least make sure there is not too much disparity).
In the current model, the incentives are:
CMDX / stATOM: 2740
CMST / StATom: 19,700
it’s proportionality (we discussed it in a previous message).
Can we consider a better distribution (in favor of the CMDX / StATom pool) so that some of the liquidity from CMST / StATom is transferred to CMDX / STATOM?
What do you think of my proposal? I specify that I do not want to change the calculation system but to correct it with punctual actions (for example, a week where we encourage certain pools to avoid too much disparity).
(for exemple, take juste 10 % of incentivive for CMST / stATOM for extra incentive CMDX / stATOM)
oo

I think that the key for a wider adoption of Comdex is CMST and not CMDX, especially in the bootsrap period of the various on chain dApps.
A lower APR on CMST pairs in favor of CMDX pairs would probably see more liquidity leaving the chain than an increase in demand for CMDX.
CMST is the gateway for wider adoption in the Cosmos Ecosystem IMO and should be prioritized.
CMDX price has also been ranging which means that there’s a good balance between demand and supply (it’s not seen as a pure farming token which is good).

I agree that one goal of comdex is the promotion of CMST. However, CMDX is important as a reward token and for blockchain security. If tokens are locked (in staking or in a liquidity pool), it reduces selling pressure and therefore the price does not drop. And therefore less rewards need to be provided. On the other hand, in my opinion, cswap should allow for exchanges for liquidations on harbord and commodo, and if Statom allows for minting of cmst, the corresponding pools should allow for trading without slippage. It doesn’t make sense to have pools that are too imbalanced.

In addition, important management of pools for CMST should be carried out by incentivizing equally with the Harbor token. CMDX should not ultimately be used only for the expansion of CMST (for now, as we are at the beginning, and Harbor is not exchangeable, my comment is not as important, but let’s see in the long term).

My idea is just for one week to take a portion of the reward from the CMST/STATOM pool (10 percent is not a lot) to balance the two pools, the proportionality mechanism will do the job in the following weeks.

Interesting part in this discussion is if $CMST is the gateway to success in the ecosystem, then promoting the pools where CMST is paired is logical.

You can make it beneficial for CMDX as well, if the CR ratio for minting CMST using CMST is a bit more attractive. That way you can use CMST to drive adoption, while also stimulating CMDX at the same time.