The Incentivization plan for our upcoming DEX

This is a way where a protocol distributes its tokens for a part of the liquidity the user has provided. When a protocol is new, a lot of tokens are distributed; that is how the current system works to attract liquidity.

When the protocol distributes large amounts of tokens, the apparent thing users, who get free tokens, do is - sell those tokens. Hence the token price is dumped, and the liquidity that a protocol gains comes at the price of the token dump. Many failed yield farming schemes have blown up due to unsustainable token emissions.

The liquidity would only stay until a certain tipping point where the users feel that the rewards they are getting are optimal, and then the liquidity starts to vanish as rewards decrease, resulting in the loss of the user base gradually. This is the case with the 2020 DeFi summer, where users/liquidity jumped from protocol to protocol, searching for higher yields. There was no long-term incentive for users to stay and provide liquidity.

Here’s an excellent example of the flywheel effects of the liquidity farming death spiral: 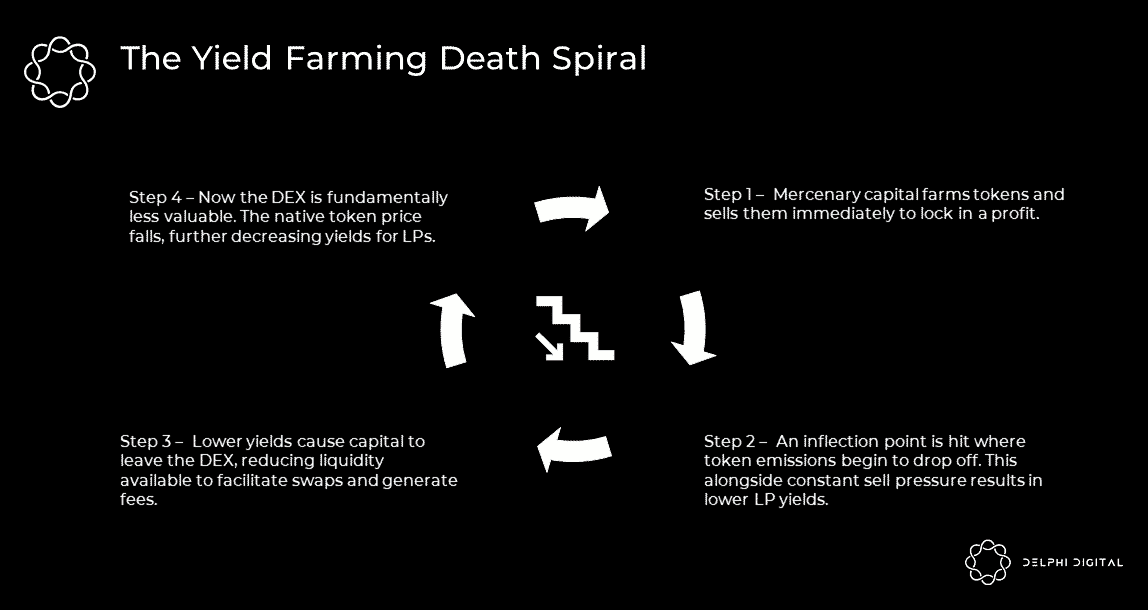 The solution that Curve Finance came up with to incentivize long-term participants:

One such model that encourages longer-term liquidity and is an optimal design that aims to dilute mercenary capital and speculators while rewarding value additive and long-term oriented participants is the vote-escrowed implementation introduced by Curve Finance. This model allows CRV holders to lock up their tokens as vote-escrowed CRV (veCRV) for up to 4 years. The longer a user locks their CRV, the more veCRV they receive.
In exchange for taking on liquidity risk and removing CRV supply from the market (showing their long-term commitment to the platform), veCRV holders are entitled to three main benefits:

The above set of incentives generates a positive flywheel. The more long-term oriented a user is (measured by their veCRV), the more rewards they receive.

The veToken model avoids this by aligning liquidity providers with the long-term interest of the protocol.

For liquidity providers on Curve to capture the 2.5x boost on their rewards, they must hold a certain amount of veCRV relative to their liquidity. This incentivizes LPs not to dump tokens but instead:

In turn, this encourages liquidity providers on the Curve platform to become long-term stakeholders and supporters of Curve’s success – as opposed to employing mercenary farm-and-dump strategies.

The problem with veCRV:

What if we give utility to the veCRV token and turn the token into an LP-staked position instead?

The proposed incentive concept of Comdex:

As the token is distributed in exchange for the liquidity that a user provides, we can devise a way of telling the user that if you want to earn the maximum rewards and get the most tokens, you must have to provide some kind of assurance/collateral in the token that is being rewarded.

This concept can be used by any protocol that wants to incentivize its users, whether a yield aggregator, AMM, Borrow/Lending platform, or wherever incentives are needed to be distributed.

As the token would be airdropped, people will be incentivized not to sell but provide liquidity and farm more tokens and compound their positions. They require not to buy the token from the open market.

The incentives are directly proportional to the liquidity provided in that incentive token pool.

For example: Let’s call the incentive token $XYZ, so a user must provide liquidity in the $XYZ/$CMDX pool to maximize their rewards on other protocol-wide pools.

In this way, it would be in the user’s interest not to dump the incentive token because that would directly impact their LP in the $XYZ/$CMDX pool.

The $XYZ token provides liquidity mining rewards to the LPs on the DEX. If the tokens are solely used for rewards, they would lead to dump because there is no other use case. So we can keep this token as a central point where anyone who wants to maximize their yield would need exposure to this token.

The core pool, or call it the master pool that is currently the $CMDX/$XYZ pool, is the pool whose liquidity is taken into consideration for incentive distribution. Users can lock liquidity for a longer timeframe and earn mining rewards proportional to their share in the pool and the timeframe they have locked liquidity. This would make this pool the centre of liquidity and lock a lot of $CMDX for the DEX.

It has a few advantages over VE locking:

The rewards that they receive may it be APYs or any sort of incentives, depend on two propositions :

Here, the concept of VE locking for long-term liquidity provisioning and governance benefits combines the concept of time locking in a user-friendly way, and users can deploy capital in a specific way to their strategies.

The LPs of this pool would also be able to direct incentives to certain pools just like the veCRV holders - the pool liquidity providers may act as meta governance of the dex.

In a way, people locking for longer periods of time in the master pool are true long-term investors and believers of the protocol and token & most rewards should be directed to them rather than mercenary capital who have a short-term farm and dump intentions rather than true long-term supporters.

As all the pools would have the $CMDX pair as a second base pair, this would lead to a supply shock for the $CMDX token as well as keep the $XYZ token a central token that directs incentives.

We would love to hear the opinion of the community

Two good articles to read on VE tokenomics and its alternatives that have similar ideas :

Hello, this is @CosmosDefi
This is a great discussion, and I would like to give my opinion:
I think the problem cannot be solved simply by long lock up periods. The reward token must actually be a reward, regardless of the APR. If the reward token has little to no real value, then it is not a reward. In order to best incentivize liquidity providers to pool tokens, the LP token received AND the rewards received must be valuable even if the APRs are relatively low.
For example, I would rather gain 8% rewards in a stable coin that I know can be redeemed for USD on a CEX than 50% “rewards” with a token that has no clear use case and will clearly face sell pressure constantly. The lock up periods will decrease circulating supply but that does not mean people will buy the token and the price can still plummet from sell pressure. The longer the lock up periods, the more likely an LPer will sell the reward token to make back their initial liquidity should it be lost. Also, by airdropping the rewards directly into the wallet makes it likely that it will be sold since
This is a big problem with LPing now that there are so many options for users to migrate their liquidity in search of high rewards. If COMDEX can solve this, it will be extremely bullish for the platform. Osmosis did mitigate this with superfluid staking, which gives the LP token utility.
One other possible solution: Deposit rewards directly into the pool and/or increase transaction fees which will accumulate in the pool. Traders may see increased transaction fees as a nuisance; however, it may be a good trade-off to minimize slippage for swaps because the higher txn fee pools would likely attract more liquidity.
The platform must also provide analytics to show users the real time growth of the pool and their positions due to rewards + transaction fees. This will give LPers more reason to keep their liquidity positions and will also reflect demand for the platform (and each pool).
Further, the LP tokens themselves should accrue value proportional as the pool size grows. Holders can use the LP tokens to direct incentives to various pools via governance or the LP tokens can be used for superfluid staking for $CMDX pools.

Love the discussion and opening this up to the community. Comdex has a real chance to innovate here.

I think I’d have to agree with @CosmosDefi. Now more than ever blockchains are going to have to prove why their token is valuable and their incentive mechanisms are sustainable. It’s great that you’re trying to innovate here but I have a few concerns about the model.

I appreciate this is a tough thing to solve, especially now. The core profit of a dex is trading fees, and being able to pay out rewards in the asset tokens (or autocompounding into the LP token itself) is a really nice, tax efficient reward, in the actual asset the user is pooling and we can assume they want more of. Perhaps an option could be to incentivise traders instead, to reduce their trading fees by staking $XYZ or even $CMDX. Higher trading fees for non-invested users could help boost LP rewards to acceptable levels.

I’m way out of my lane here, you guys know far more than me about designing something like this. I just feel like now could be a turning point in crypto, and this discussion came at an interesting time!